Today's the release date for the new album Johnny Cash: Forever Words, the musical companion to Forever Words: The Unknown Poems, a best-selling volume of Cash’s unpublished writing edited by Pulitzer Prize-winning poet Paul Muldoon and curated by Steve Berkowitz and John Carter Cash. The first music video featuring a song from the album was released last week, on March 29th. Performed by Rosanne Cash, the artist sets one of her father's poems to music for "The Walking Wounded."

My twin sister Sheryl and I were filmed for the music video in October during the inaugural Johnny Cash Heritage Festival in Dyess, Arkansas. Along with our colleague Shelly Warner, we attended the festival on behalf of The Everly Brothers Childhood Home Foundation. We were there to learn more about the restoration of The Johnny Cash Boyhood Home and its development as a music heritage destination in hopes of gaining knowledge for our work in Iowa. We were inspired by it all, including the shared biographical and musical ties between Johnny Cash and The Everly Brothers.

Read my article from October: "The Everlys Meet Johnny Cash In The Sunken Lands."

I typically work behind the scenes, casting limelight onto musical legends, so the prospect of appearing in a music video on behalf of an artist like Johnny Cash was new and exciting! Adding to its depth and sentiment was the fact that the song was a posthumous co-write with his daughter and the music video was to be filmed at his recently restored boyhood home. Sheryl had visited the residence as a student researcher during the beginning phase of its restoration, so this special reunion made the experience all the more remarkable.

Anticipating the video's spring release, I'd been wondering how, as an individual subject and as a twin, I translated emotionally and aesthetically to the screen. After all, I wasn't an actress and my involvement was unexpected. When we started the day with a wagon ride from the Dyess Community Center (former Dyess High School) to the festival site adjacent to the Cash home, we were completely unknowing of the extraordinary opportunity before us! (left to right in photo: Sherry, Shelly, Sheryl).

I hoped that my passion for music and the many sacrifices I've made to pursue it, along with life's recent ebbs and the three days I'd spent connecting with Cash's Dyess, had influenced my moment center stage. We weren't given an exact release date, but when the album was announced, we knew the music video was on its way. This kept us pacing in anticipation until the day arrived!

Brimming with nervous energy and excitement, I watched...

From the opening frame, I was swept away. The desolate field, the endless dirt road, the desperate affliction in every face. As protagonist, Rosanne unabashedly summoned a stirring ensemble of individuals representing "The Walking Wounded." I was one of those individuals. It was so gripping, so powerful. It took a few views to get used to seeing myself and sister on-screen, but I was ecstatic that we made the cut alongside a cast that included actors. As we stepped forward in unison with the wind wildly tousling our hair, we made a contribution to the narrative that was uniquely our own, but at the same time, belonged to everyone. It was a statement in the blink of an eye (literally and figuratively!).

Permitted to join the set, Shelly took some fantastic behind-the-scenes photos of us being filmed at the Cash home and speaking with Director David McClister (I'm wearing the black floral jacket). 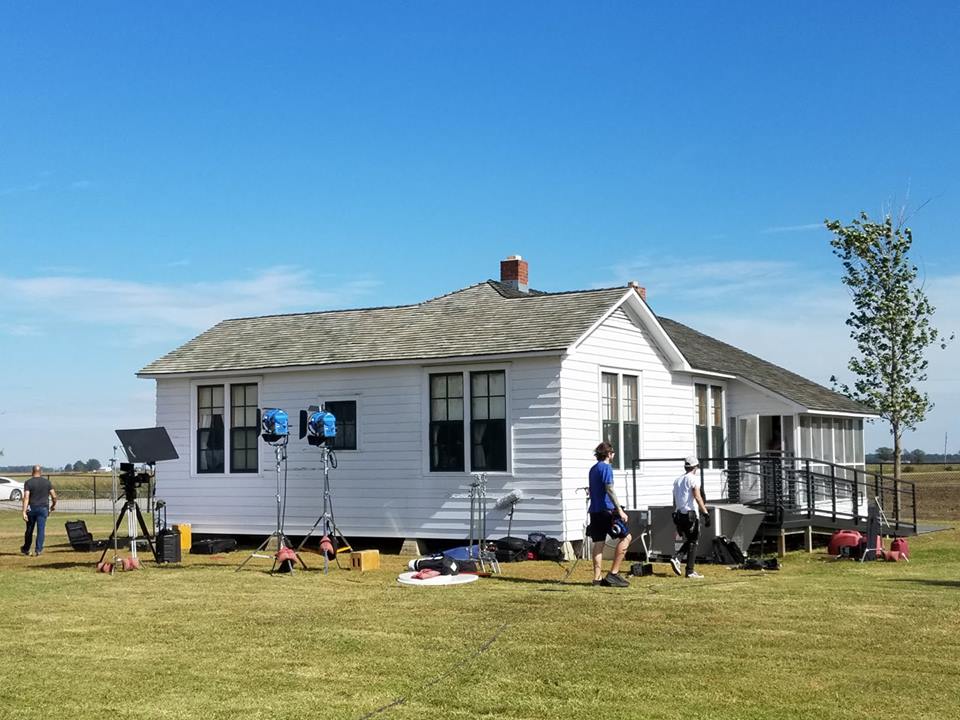 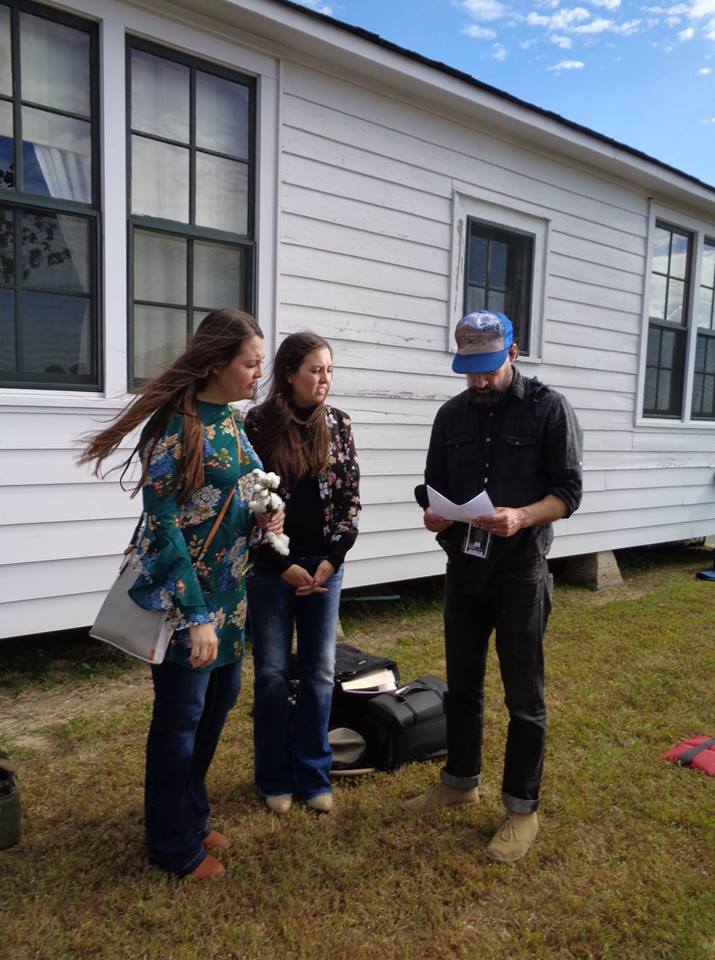 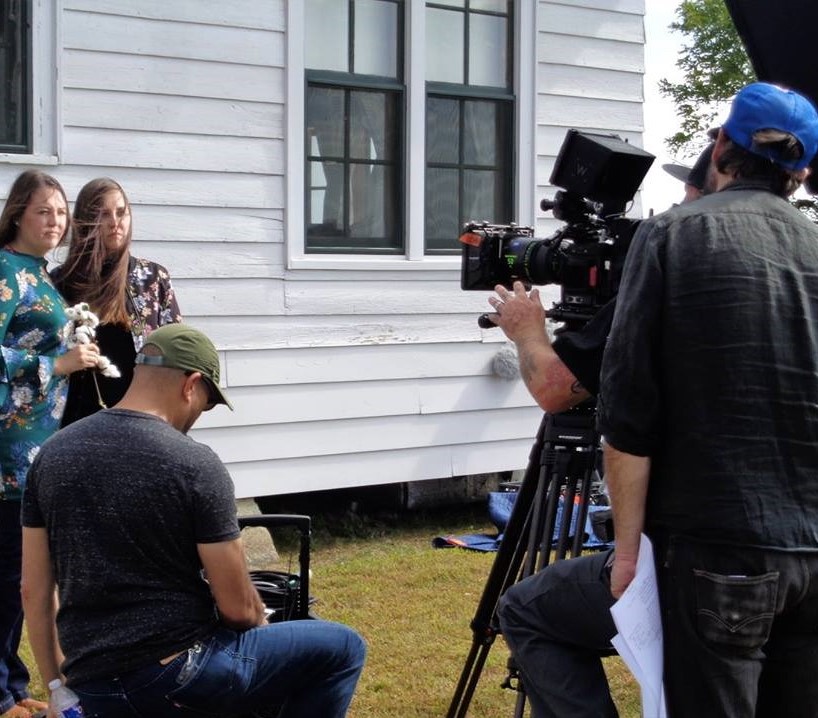 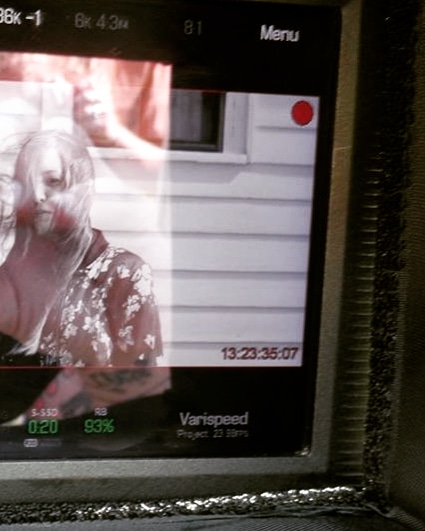 The lyrics were profound, revealing and melancholy as befitting "The Man in Black." A lifelong champion for the everyman and the marginalized, his words once again gave voice to our plight and collective experience. He had always been a poet laureate of "The Walking Wounded." Having followed in her father's footsteps, not only musically, but in her quest for social justice, Rosanne's performance gave a strength and conviction to the song that only she could deliver.

"There’s so much pain in these lyrics, and they’re unrelentingly dark,” says Rosanne. "I really tried to feel what [my father] would have thought about it, and it felt like a collaboration. I think he’d be proud of it. I am." Read the article and watch the video.

The use of minimalism and affecting black and white to capture the individuals on-screen was like a collage of early vintage photographs. The faces were devoid of smiles and frills, but fully dimensional in their show of raw emotion. It was art, vulnerable and pure. There was a brutal honesty about it that reminded me of "Hurt," Johnny's final music video, which holds a mirror to self and society in a plea for self-actualization. And while Rosanne is an artist in her own right, her approach to the big questions and issues is not too far divorced from that of her father.

Although Shelly wasn't filmed in the music video, she enjoyed a singular experience when her tour bus arrived at the Cash home while Rosanne and the crew were still working! This is one of the beautiful images she captured of Rosanne on-set in her father's bedroom.

Using historical and contemporary contexts, viewers experience the timelessness of the song's enduring and universal theme. The Cash home is at the heart of the piece, connecting past to present, from Johnny's history to our own. It reminds us that the afflicted are not only people, but historic places that tell our story. Just like its human counterparts, the home also experienced a sad state of disrepair.

Gathered from her research, Sheryl compiled three photos representing the life of the structure. The first is a rare photo of Johnny standing on the steps of the home as a child in the 1930s. The second is a photo Sheryl took during her first research visit in July 2011 and the third was taken during our trip to Dyess in October 2017 when the music video was filmed.

The partial verse that Sheryl and I were asked to sing (lip sync) on camera as we stood next to the home (this footage wasn't used) spoke to its story as much as it did our own: "We cried out from the deepest pit. But rise back up each time we're hit." The verse continued: "We fell from power and from grace. Resurrection's in our face." Yes. The Cash home's fortified presence is a testament to the beautiful tenacity of people and preservation.

As preservationists, we do our best to give a voice to the voiceless: built and human. Between apathy and greed, historic places don't always escape the wrecking ball or the decay of time. People don't always have their stories or artifacts preserved before being lost to posterity. But for the Cash home, there's a happy ending. "The Walking Wounded" offers a powerful, timeless message and how fortunate we are to have been given the opportunity to play a small role in its artistic delivery!

The content on this site belongs exclusively to its creator and author, Sherry Davis. It is protected under the Copyright Act of 1976 and all subsequent amendments to copyright law. An excerpt or image may not be reproduced without consent. Please contact the author to request permission.

Visiting Boys Town: The Embodiment Of Heart And Song

Visiting Boys Town: The Embodiment Of Heart And Song